Fullflush Poker Is The Place For Beginners - Away From The Sharks! 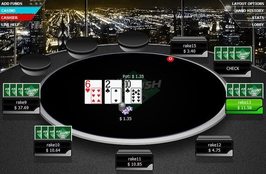 Fullflush Poker is licensed in Curacao in the Dutch Antilles and unlike a lot of the other "beginner" sites out there, they use gaming software powered by the reputable Playsafe Holdings AS, gaming developers from Norway.

The Company is relatively new and pre-launched in September 2013, with their formal 'Real Money' launch in November of the same year. Favorable reports from Fullflush Poker users so far indicate this may be a casino that is flying under the radar, and there seem to be some good reasons why. Let's take a little look and check it from the inside out.

Not surprisingly a lot of Poker reviews are geared towards semi-pro and pro players who are looking for plenty of fish that they can easily beat. But what for the players who are wanting to learn, do they really want to be playing in a casino infested with sharks. No pain, no gain? No thanks! Far better to swim in safer waters where one can learn, have fun and be profitable all at the same time. Then here's the best place to be!

The variety of ring games, freerolls and tournaments shouldn't dent the bankroll too much and will appeal to seasoned recreational players as well as new players just starting out. Not only players from foreign countries can play, but those also from the United States.

At present, only three states, New Jersey, Delaware and Nevada legally allow gaming for their residents. If from anywhere else, to play legally the choice is limited to only a handful of casinos. Fullflush Poker is one of the 'chosen few'. Set up as a site primarily for beginners and low stake players, all pros are advised to look elsewhere, sorry but no easy pickings allowed!

Fullflush Poker, is a great way to get involved in the game of Poker. Come and participate in some of the generous bonuses on offer and see just how good it really is. A pleasant experience is guaranteed, anyone ready for some fun and excitement? Come pay a visit today and experience the difference first hand, with sharks kept at bay, it's time to relax, learn and play. The secret's now out!